This section provides advice on improving the performance of your scripted actions to ensure that your job requests stay within memory limits and complete as quickly as possible. While the specific guidance here is geared toward R and Python, the principles can also apply to other languages (such as Stata).

When developing your code, there are options in the OpenSAFELY CLI you can use to control the computing resources used.

These options may be useful when developing locally. However, the techniques listed on this page are useful both in local development and when running your code in production.

Objects like vectors, data frame columns, and matrices use different amounts of memory, depending on their type and class. You should use the class that minimises memory use whilst preserving information.

In general, for memory use of types in R assume that (logical = integer) < double < character. In Python, it's (logical = bool) < float < object. Note that factors (categorical in Python) are integers in disguise, with a small amount of metadata (or attributes) to map the factor levels to the underlying integer value. Similarly, dates are doubles in disguise, with attributes defining the date origin. In R, the memory use of class attributes is usually negligible, so you only really have to consider the underlying data type.

The most likely savings in R are double to integer and character to factor. In python float to int and object to categorical.

Slim down your datasets🔗

Remove or slim down large objects from memory🔗

Consider subdividing very wide or very long data into chunks. Can you divide the data into yearly chunks or run the script on each outcome separately and aggregate the results later? If the processes do not depend on one another, it will be possible for jobs to run in parallel to one another on the server, completing sooner than running in one continuous process.

If you are extracting multiple events over time per patient, consider extracting covariates you expect to be time-invariant (e.g. ethnicity) separately, then merging it onto your outcome variables later (made easy using cohort-joiner).

Say you’re studying 1 million people. Maybe just 50,000 is enough? Perhaps at least for preliminary work. In which case, let's take a random sample of 50,000 people which will reduce the dataset to a 20th of its original size.

Maybe a simple random sample doesn’t work because the outcome is rare. In case case keep everybody who experienced the outcome, and randomly sample the rest. In this case, the contribution of each person in the model should be reweighted by the inverse of the sampling probability – for those who experienced the outcome this is 1, and for those who didn’t this is N/n, where n is number of non-outcomes who were sampled, and N is the total number of non-outcomes.

This is useful for preliminary development work for speed but may sometimes be a necessary design feature, for example if the analysis requires large, time-dependent datasets on millions of people.

Parallelisation allows multiple processes to be run at once on different processors (or "cores"), which (usually) means things happen faster.

Operations that are amenable to parallelisation include: GLM-fitting (Stata does this automatically, see the parglm package to do it in R); exact matching; bootstrapping; multiple imputation. Be considerate here: don’t access so many cores that other users will suffer. If you need to use more than 8 cores to get close to a sensible run time, then you should probably reconsider your approach.

Note that while you can spread you processes across different cores in a single action, there is still a hard memory limit for each action which is the same regardless of the number of cores you're using. However, you can take advantage of OpenSAFELY’s job-runner tooling to split operations across different actions, which will run in parallel if there's capacity to do so.

Use profiling tools to identify processes that can be optimised🔗

Beyond selecting memory-efficient data types and removing large objects, finding memory efficiency gains will require profiling the code to identify the most memory-intensive processes and determining whether they can be optimised.

One possible method is to add print statements in your code to write to the log when getting to specific parts of the code. This will help you identify how long it took to get to a certain point in your code on the server. If your job did not successfully complete, it can also help you find out at what point in the code it failed.

Another method is to locally run line-by-line profiling tools to time the processes in your code on dummy data. For example, the LineProfiler package in Python provides the @profile decorator to get line-by-line execution time for each function. While this does not explicitly measure memory use, it helps to identify where your code is taking the longest, which may help you decode why it is running slowly on the server. You can get statistics like number of hits per line (multiple if in a loop), time taken per line, time taken per hit, and percentage of total time next to each line. You can run and save the output to a text file by running the following in the command line.

Below is a screenshot of an example output. 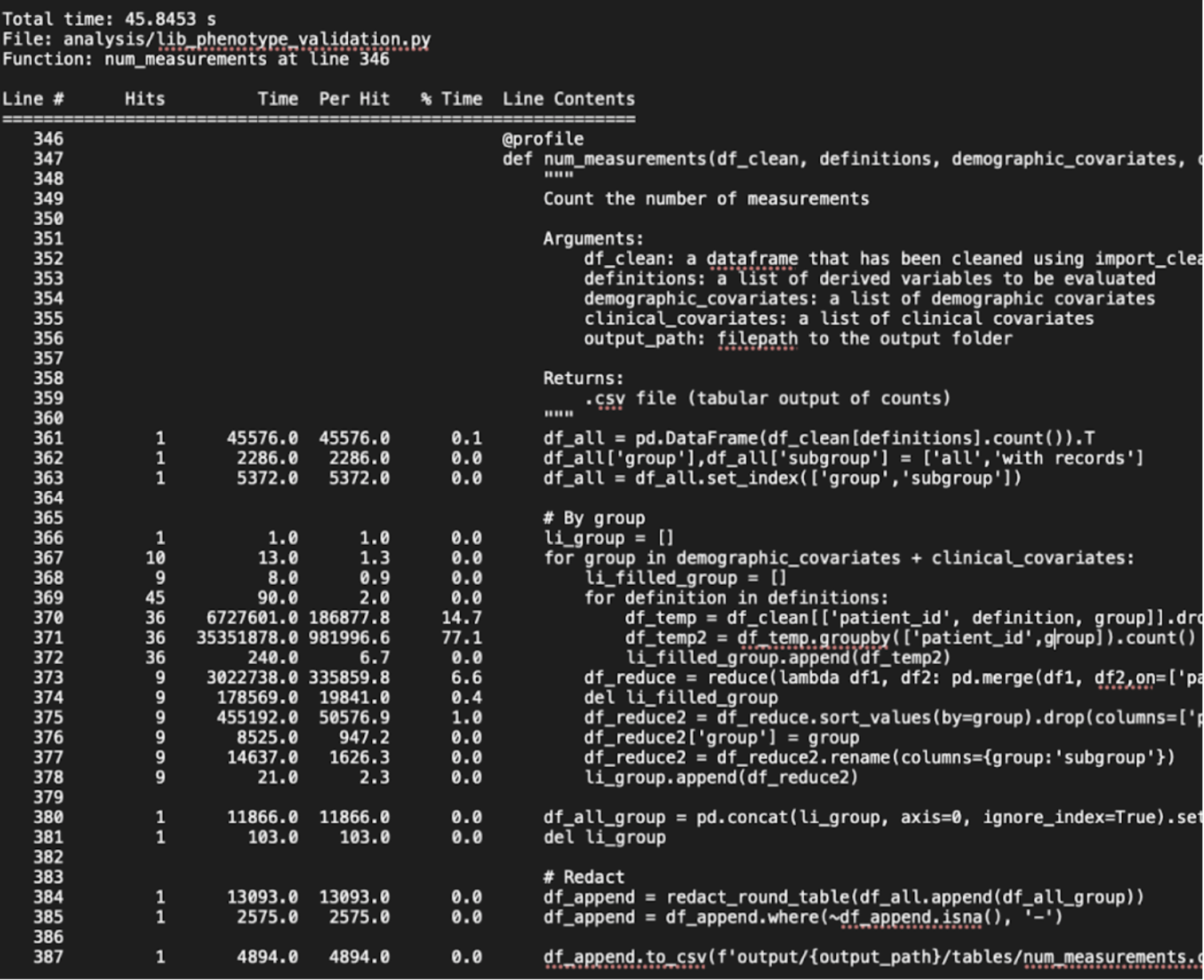 In a Jupyter notebook, you can run an IPython magic command %prun before calling a function to get similar line profile results as a cell output.

While profiling can help identify which parts of the code is taking up the most memory or time, it does not guarantee that there will be optimisation solutions. Some processes are inherently more memory-intensive than others (e.g. sorting values). Additionally, depending on differences between the dummy data and real data, locally estimated timings may differ from timings based on real data.